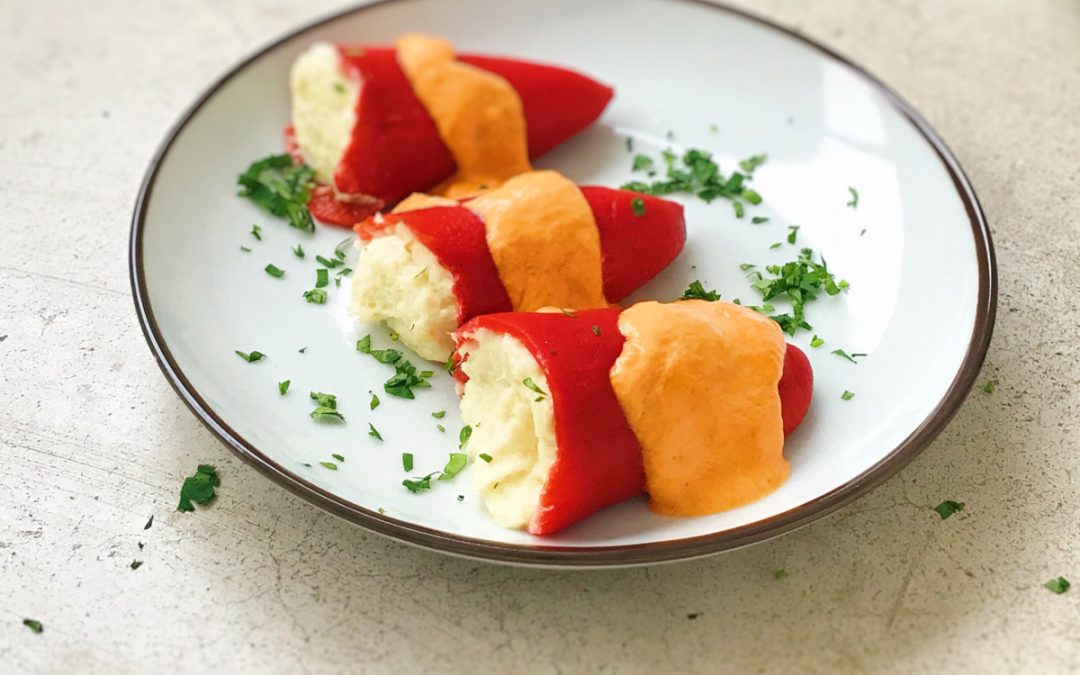 Cod brandade is a dish to fall in love with. Agreeable, delicate and simple. We will also add a piquillo pepper sauce to delight even the most demanding. 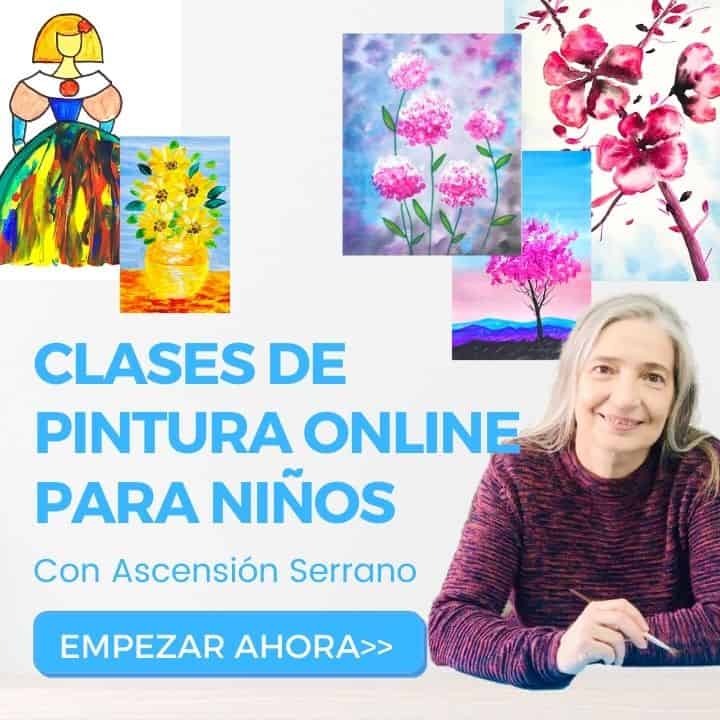 HOW DO YOU MAKE COD BRANDADE?

We will use desalted or fresh cod to enjoy this dish without further complicating its existence. The speed of life that we lead forces us to simplify, in order to enjoy the food without sacrificing too much time. The truth is that the Thermomix is ​​a great help to do just that. 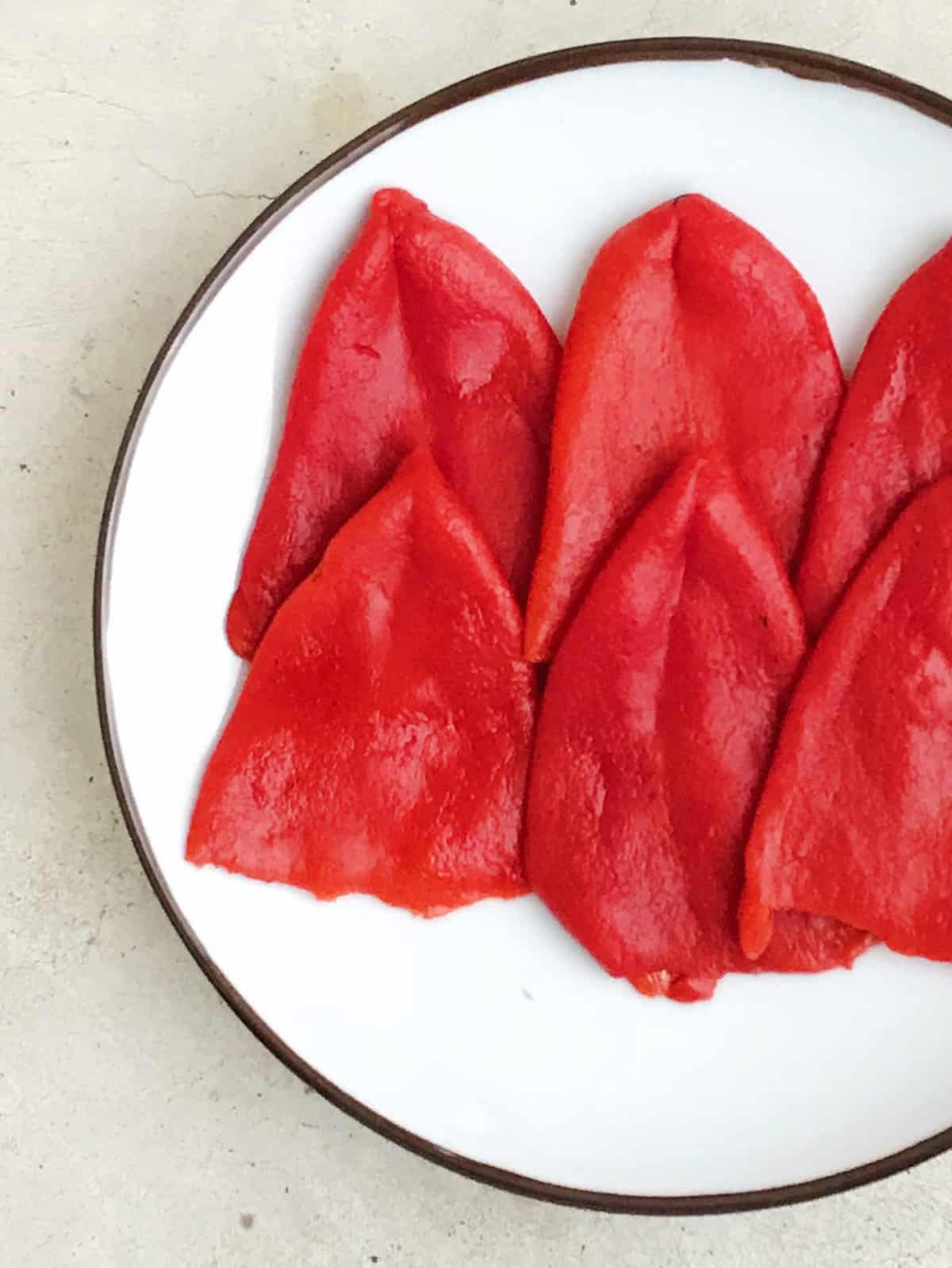 In the past, without the current transport possibilities in the interior of Spain, cod was one of the few fish used in the kitchen. With salt being a good preservative and cod being an affordable fish, it allowed many Spaniards further inside the country to enjoy this fish. That’s why there are many traditional recipes that use cod as the main ingredient. In my region La Mancha there are innumerable recipes with cod such as ajoarriero or atascaburras, cod manchego, tiznao or cod with onion.

A lady with her kitten arrived at our previous hotel in the Basque Country; and came to offer cooking recipes from her hometown.

She carried cod among her belongings, and we suggested that she cook it in our kitchen. She listened to us, grabbed the unsalted cod and set to work, but stopped and improvised halfway through the preparation because she did not know where her cute kitten was, which she had put on the floor minutes earlier while cooking. Afterwards, the tiny kitten began meowing unsatisfied and left unnoticed.

– It’s ferropenic, has no claws and is exclusively piscivorous; if I do not find it, my little beast will suffer a lot-she added. 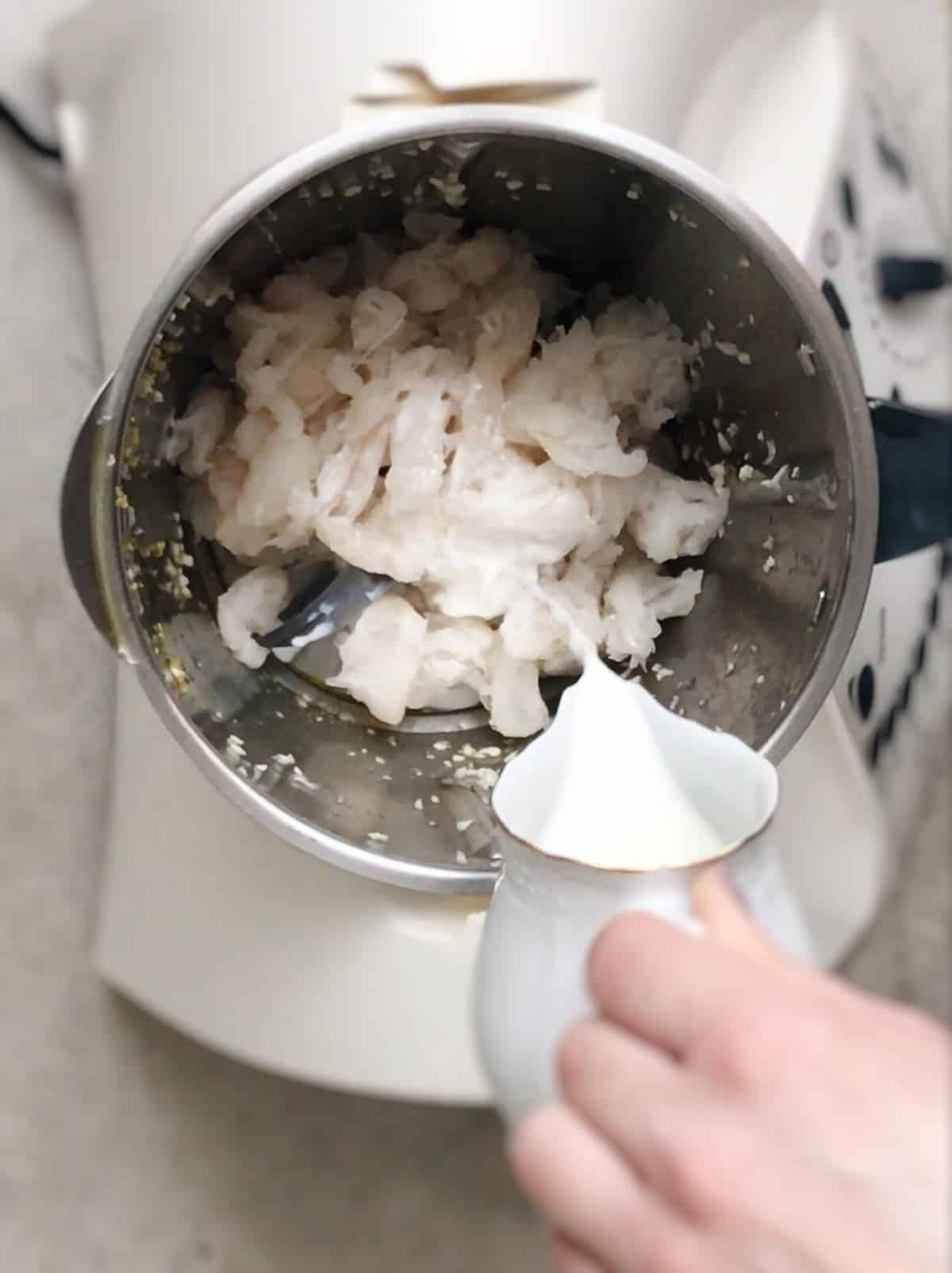 A few days passed and the lady finally managed to cook an exquisite and successful cod brandade. She turned the brandade into the star dish of the town. Christmas Day was decorated by the city council with a gastronomic plaque.

That morning the kitten had died and the poor widow had to bury it in a field under a flowering cherry tree. Her sadness intensified as the days passed, and she stopped visiting the hotel kitchen with the consequent displeasure that it produced. The clients’ displeasure was tangible, being deprived of such appetizing dishes.

The cats of the village drew close to the tomb of the poor widow’s kitten, showed respect and tried to get the owner’s attention. She perceived them very focused on and determined to please her, which led to her bringing them food regularly.

One afternoon, upon she returning to the hotel, she noticed a ragged and scrawny cat sitting right next to the garbage in a smelly alley. It had eyes so blue and luminous that were very pleasant to look at. The widow took pity on it, visited him daily and brought it food, but the animal refused the food, and continued to worsen.

It was a cold winter afternoon when she realized that the dying feline only liked cod. She decided to adopt it, took it home and washed it thoroughly in the bathtub.

A few minutes later the cat showed all its splendour, and the poor woman discovered something amazing; the cat was identical in color and size to her previous kitten. She did not want to inquire any more, she went with her new cat to the hotel kitchen and put herself to prepare delicious cod brandade.

She placed her pet in a corner of the kitchen and, while warming up half a cod casserole, she heard a frail meow. She smiled because the new kitten was now tied with a beautiful metal strap to one of the legs of the table.

We celebrate this reunion of both, or whatever being that cat was because again the public demanded the cod brandade.

And whoever does not understand this story should try a codfish brandade of the widow while hearing a soft and happy meow. 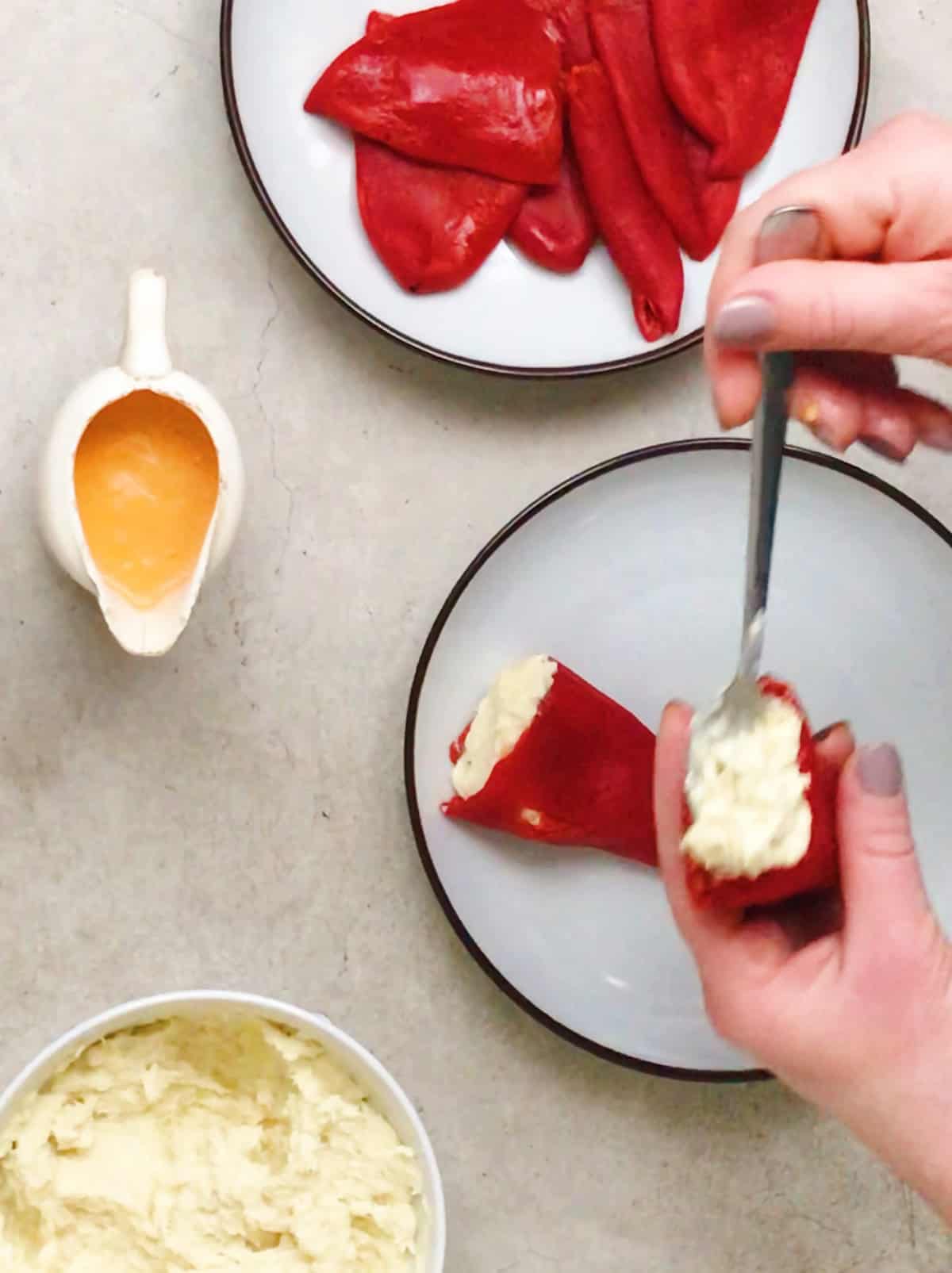 Our story could well have been about any town on the Iberian Peninsula because cod fits perfectly on the list of foods that are related to Lent or vigil. In addition, it resembles very much in its foundation a dish from La Mancha, which is typical of cold places or of winter and even very popular when the first snows fall in the Serrania de Cuenca. In those areas of the plateau the dish called atascaburras.

Even though cod is a white fish, it is excellent in a balanced diet. It is composed of:

HOW TO DESALINATE COD?

If you are one of the people who enjoy cooking and you like to desalinate the cod yourselves then follow these instructions to desalinate it:

if the pieces are very large we must cut them into smaller pieces. Wash the cod under running water and then cover the pieces with plenty of water with the skin of the cod facing up. We put it in the fridge so that the temperature is constant between 6º and 8º, thus preventing the cod from fermenting. 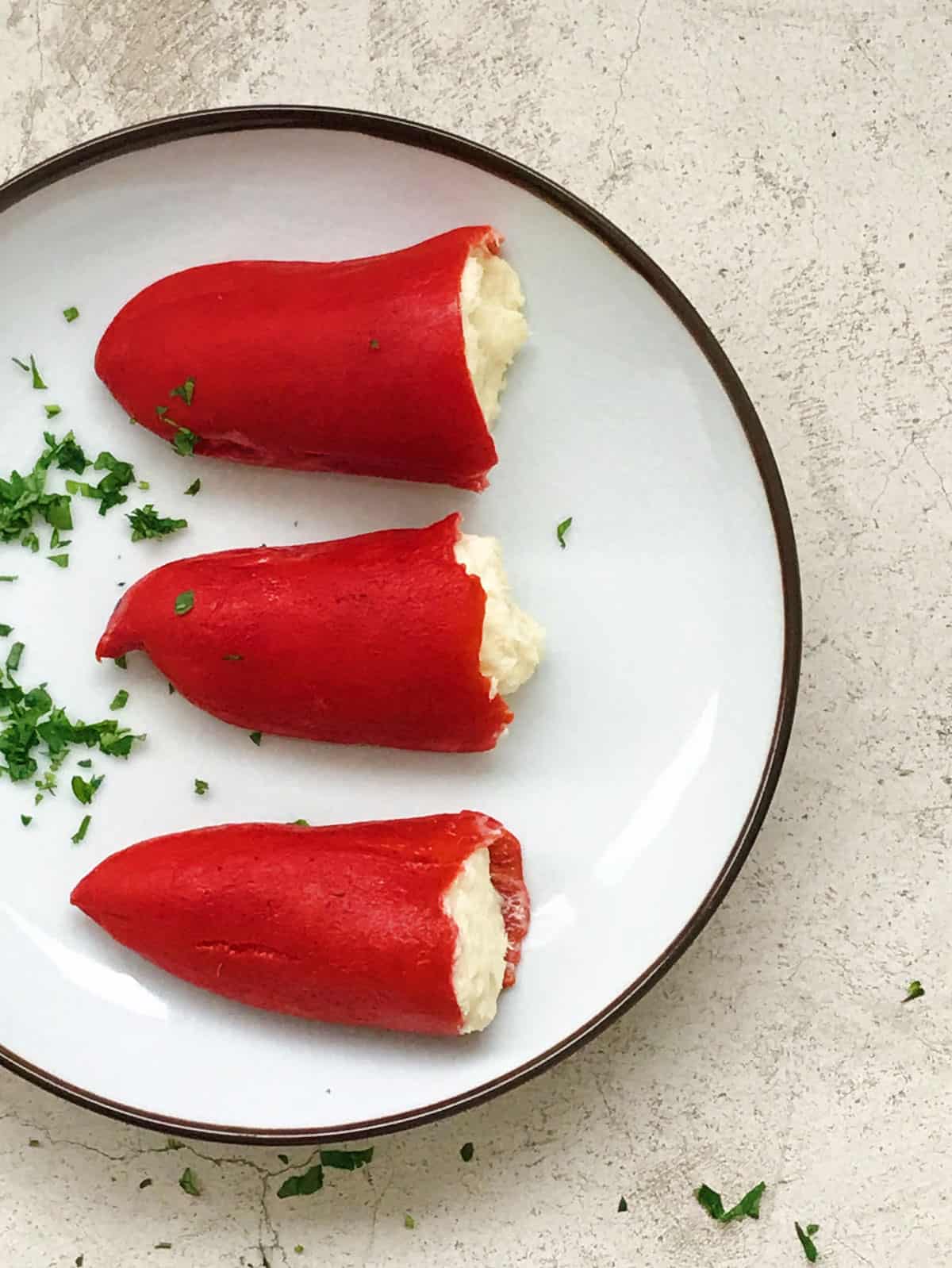 We must desalt it for at least 48 hours, changing the water every 8 hours. You can put an alarm on your phone to not forget. Without one I would be lost because I usually don’t even remember to change the water the first time.

The water is renewed because as this process occurs by osmosis, there comes a point where the concentration of salt in the water is equal to that in the cod, meaning that the salt doesn’t leave the cod anymore. Hence the need to change it every so often.

Once desalted, we remove the cod from the water and place it on absorbent paper so that it drains well and to prevent the fish from being watered down. We can also freeze it for later use. Always check for spines and remove them.

Once we have finished the brandade we begin to fill the piquillo peppers, which we will have washed well beforehand. They look like the cap of Little Red Riding Hood bringing food to her grandmother, right? The red color is very attractive, my daughter loves them when we serve them. 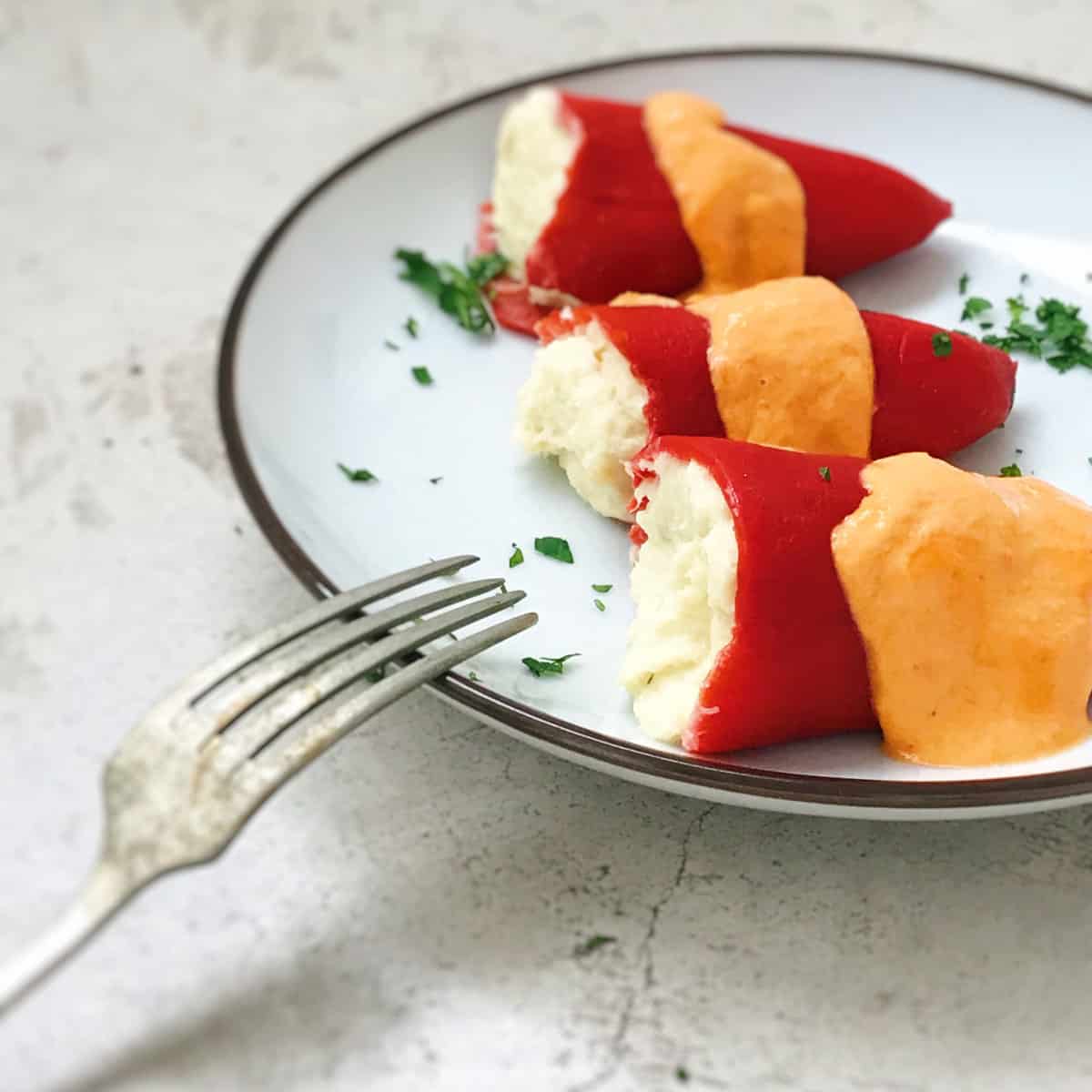 The final touch is added by the delicious red pepper sauce, bringing incredible flavour to the dish. I personally love it, but without abusing the fact that it isn’t hypocaloric.

And that is how simple this recipe of piquillo peppers stuffed with cod brandade is, made with the Thermomix.

Imprimir receta
STUFFED PEPPERS FILLED WITH COD BRANDADE FROM THE THERMOMIX
Piquillo peppers filled with cod brandade, accompanied by a flavorful sauce of red peppers and leek is a success, even with the youngest, most picky eaters. Easy to prepare with the ThermoMix. 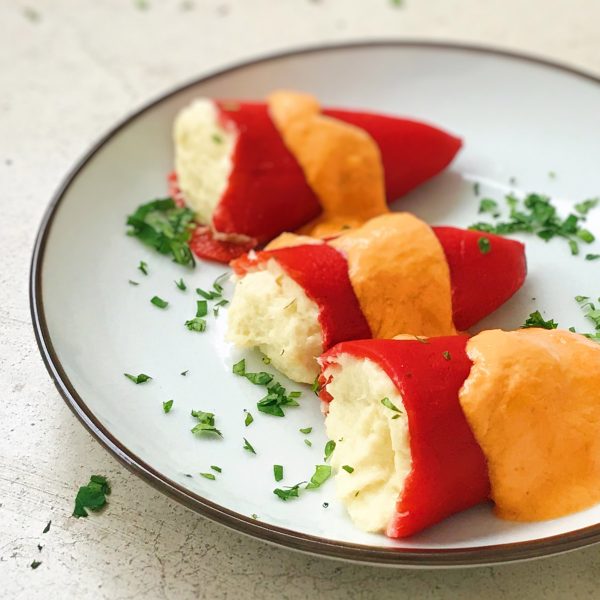 Put the stuffed peppers on a simple dish, because the color of the peppers is already important enough by itself. Sprinkle with a little chopped parsley and serve with the orange pepper sauce. The explosion of colours is very attractive for the little ones.

Method to desalt the cod: Let the salted cod soak in plenty of cold water for at least 24 hours. Change the water at least 3 to 4 times.

Place the stuffed peppers on a plain plate, seeing as the color of the peppers already carries enough importance. Top with a little chopped parsley and serve with the orange pepper sauce. The explosion of colors is very attractive, even to the little ones.

If desired, decorate the peppers with squid ink sauce.

This site uses Akismet to reduce spam. Learn how your comment data is processed.

This website uses cookies to improve your experience while you navigate through the website. Out of these, the cookies that are categorized as necessary are stored on your browser as they are essential for the working of basic functionalities of the website. We also use third-party cookies that help us analyze and understand how you use this website. These cookies will be stored in your browser only with your consent. You also have the option to opt-out of these cookies. But opting out of some of these cookies may affect your browsing experience.
Necessary Always Enabled
Necessary cookies are absolutely essential for the website to function properly. This category only includes cookies that ensures basic functionalities and security features of the website. These cookies do not store any personal information.
Non-necessary
Any cookies that may not be particularly necessary for the website to function and is used specifically to collect user personal data via analytics, ads, other embedded contents are termed as non-necessary cookies. It is mandatory to procure user consent prior to running these cookies on your website.
SAVE & ACCEPT